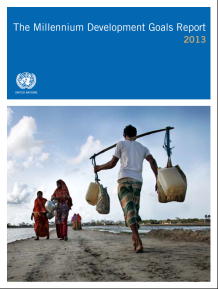 Source: UNDP. The Millennium Development Goals (MDGs) have been the most successful global anti-poverty push in history, the report says. Significant and substantial progress has been made in meeting many of the targets—including halving the number of people living in extreme poverty and the proportion of people without sustainable access to improved sources of drinking water. Remarkable gains have been made in the fight against malaria and tuberculosis. There have been visible improvements in all health areas as well as primary education.

This year’s report looks at the areas where action is needed most: hunger, maternal health, sanitation and environmental protection, for example. This report also shows that the achievement of the MDGs has been uneven among and within countries.

"In more than a decade of experience in working towards the MDGs, we have learned that focused global development efforts can make a difference," UN Secretary General Ban Ki-moon says in the report. Through accelerated action, the world can achieve the MDGs and generate momentum for an ambitious and inspiring post-2015 development framework."