Some days ago, my friend Douglas, sent  me the chart attached: "Anglo-EU Translation Guide". My friend Douglas comes from Canada, and English is his mother tongue. He is a senior executive of a global company, with more than 25 years of experience working in Brussels with the European Union institutions.

I hope you enjoy the chart as much as I enjoyed it. 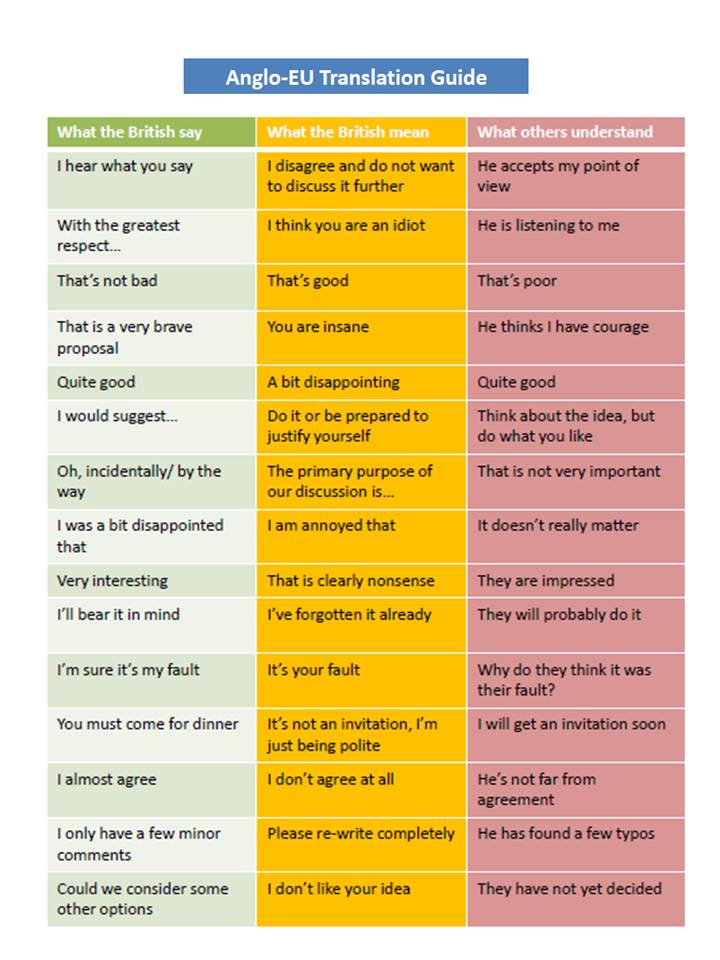 The Economist posted also about it

Alberto Andreu
11 May 2011 | Responder
Thank you very much for your comment. For non Anglo-Saxon speakers, it's so difficult to understand not only the real meaning of sentence, but mainly the hidden meaning of some expressions. But reading your mail, I also realize that "controversial" and "courageous" has not only different meanings but also different consequences. Thank you again
Michael Hammond
12 May 2011 | Responder
Yes, I recognize all these expressions and their true (British) meanings. I would, however, like to defend the majority of British people who cringe when they hear these things said. Originally they were undoubtedly used to hide the speaker's true meaning, but for British people they have long since become the stuff of satire.
Esteban
12 May 2011 | Responder
In negotiations: A British guy said: "There might be room for improvement". The US guy said: "This really pisses me off." They both actually meant the same...
Anglo-EU Translation guid
12 May 2011 | Responder
[...] Amplify’d from www.albertoandreu.com [...]
Arlene
12 May 2011 | Responder
Very interesting (ahem, truly) and entertaining...

You are right, it isn't always easy to come across exactly as one intends, however fluently one speaks. All in the nuances...

As a Brit, (who speaks four languages), I often feel quite embarrassed at how little effort most of my countrymen (and women) make to communicate in foreign tongues; shame they don't realise how much more they would get out of the experience if they did...
guenstig
13 May 2011 | Responder
Very funny but also very true, Once you understand these subtleties you are really into english language.
btw. I think this is a very brave proposal :-)
Alberto Andreu
13 May 2011 | Responder
Thank you for your comment. Unfortunately, surfing in this subtleties is not easy for non English speakers
What the English say and
16 May 2011 | Responder
[...] A little bit of humor: “Anglo-EU Translation Guide” : AlbertoAndreu.com. [...]
Ben Menadue
16 May 2011 | Responder
Thanks for this guide - it reminded me of years of working on EU project development with non-native english speakers. Consequently I found it quite entertaining. (= I rolled on the floor screaming with hysterical laughter until I was exhausted from weeping)
Annette Juckes
18 May 2011 | Responder
excellent! I just would like to add another one:

Brit: "Are you sure you are right?"
Meaning: "I am convinced you've got it wrong!"
Alberto Andreu
21 May 2011 | Responder
Thank you for this! I will include in the new release!
A quick find to smile abo
26 Jun 2011 | Responder
[...] of the differences between what we say, what we mean and what non-Brits think we mean. Thanks to AlbertoAndreu.com, where I StumbledUpon this [...]
Mike Pope
11 Nov 2011 | Responder
A very good book, which not only covers some of these points but also explains much of the background and why Brits (or, more specifically, the English) are the way they are, is "Watching the English" by Kate Fox. I cannot recommend it highly enough to anyone bemused by "English-speak"...
Espere...