How to manage enemies at work 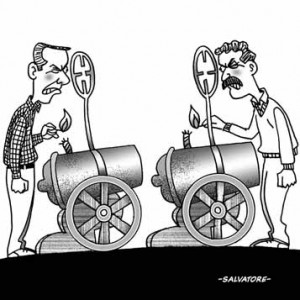 Some time ago, I stumbled upon the following quotation: “It is sad to have no friends, but it is worse to have no enemies, because if a person has no enemies it is likely that they have: no talent that overshadows others, a personality that leaves no impression, no value to be feared, they are not worth gossiping about, have no belongings worth coveting, nor anything good that causes jealousy.” They are nothing.

Do you know who said that phrase? It’s by José Martí, the poet and father of Cuban independence. When I read it, I admit I was alarmed. But later I realised that it contained, in essence, a hot topic within organizations: if you want to survive you must manage your enemies.  Let’s see how we can do it:

1.      Assume that from this moment: you already have a small number of enemies. Even if you are completely at peace and secure in the knowledge that you have nothing against, and have not done anything to wrong, anyone.  The causes of these grudges can be as diverse as people themselves. Envy in one: José Martí, with infinite precision, said that envy is in the cause of all grievances; envy of talent, personality, of worth, of honour, of possessions or of anything else a person could have. Self-esteem might be another good way to increase the list of enemies. In this regard we could list thousands of examples (Mozart and Salieri), but it is not necessary.

2.      Keep enemies close to you. There are some people who think that the farther away an enemy is the better. However, remember one thing: is it not easier to predict the actions of someone next to you, than try to guess the movements of someone you cannot see? If you don’t believe me, you only have to realise that the world was safer before than it is now. Before, there was a great enemy, institutionalised and official. Now, nobody knows where the problems can come from. Therefore, you should never close off ways for dialogue, directly or through third parties, with those who are your enemies.

3.      “Making peace” with some people is just a waste of time, the battle is lost before it has begun. It is strange, but, the more you attempt to convince someone that you haven’t done anything; the more you try to be nice; the more you do to fix things… the worse it is. I don’t know why, but this is usually true. Maybe because that attitude on your part stirs up more envy and augments the insecurity of the enemy. That’s why I believe that you shouldn’t waste your energy trying to fix things with some people.

4.      Put the conflict to bed, or, in sporting parlance, calm the game down. As the saying goes, time heals everything, and additionally, as Spanish Nobel Prize Camilo José Cela said, usually “the person who lasts the longest, wins”.

5.      Indifference or ignoring them is another good way to combat your enemies. Don’t “fall in the trap”, don’t get involved in small fights; remember that the excesses of your enemies should be like “the buzzing of flies” as Mika Waltari put it in his book The Egyptian.

And there you have my thoughts on the existence of enemies. As the saying goes “whoever has a friend has something to treasure”. But, maybe, having a good enemy is not such a bad thing. A friend of mine said “a good enemy dignifies you”. Maybe it makes you stronger when facing others, a better speaker, colder and more thoughtful. And, in addition, forgive them. Oscar Wilde put it well saying: “Always forgive your enemies. There is nothing that annoys them more.”

Extract of a post published in the daily paper “Diario 5 Días” November 29th, 2002