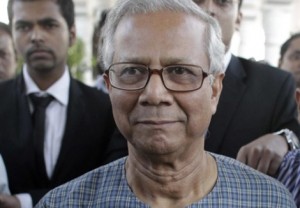 The Nobel laureate who founded a pioneering microfinance institution, the Grameen Bank, has quit as its head after a long dispute with Bangladesh's government.

The announcement by Muhammad Yunus that he is standing down as managing director is a watershed in the 28-year history of the bank, which is credited with lifting millions of the world's poorest people out of poverty. It also ends a protracted legal wrangle with the Bangladeshi government over control of the bank.

Yunus wanted to "ensure my colleagues and our 8 million members, and owners of the bank, are not subjected to any difficulty in discharging their responsibilities". He took the step "without prejudice" to outstanding legal issues.

Read the full info in The Guardian