Cool head or warm heart? Managing from "the guts" 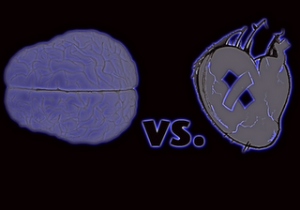 Admit it: when it comes to making an important decision, how many times have you found yourself choosing between what your head tells you and what the heart wants, or balancing the cool head and the warm heart? Answer: more than once and maybe even several times a day. In a situation like this, thousands of arguments can be taken into account.

Cool head or warm heart? A cool head is something that has been recommended to us ever since we were children: don’t lose your temper, don’t be moody... Thinking with a cool head, you have to weigh carefully what would be won, what lost, what would you stop earning (personally and economically), the cost of the mortgage, the loan for the car, school for the children, or that beautiful professional career that could be put in danger if the heart shows through just a little.

However, it would be interesting to air the benefits of decisions taken with the heart in the heat of the moment. I’m not going to try and defend a type of “gut management”, but it does seem interesting to reflect upon when, where and why it is sometime appropriate to give free reign to the heart when making decisions. When?

1. When you are starting something from scratch. Since I have nothing to lose and everything to gain, I can allow myself the luxury of being a bit crazy, of taking certain decisions that, in other circumstances, I wouldn’t risk. Specifically, I am referring to the founding of “visionary” companies, those companies that more than one person thought would be brought back to earth with a bump right after being started.

People like William Hewlett and David Packard (HP): or David Filo and Jerry Yang (Yahoo); or Steve Jobs and Steve Wosniak (Apple); or Larry Page and Sergey Brin (Google); or Enric Bernat (Chupa Chups); or Ramón Areces (El Corte Inglés) probably knew that logically what they were doing wasn’t the best way to proceed; but their gut feeling, heart, reaffirmed their intuition.

2. When you believe your principles are being violated. I am referring to both specific and abstract things such as friendship, ethics, dignity, professionalism, responsibility, honesty and exemplariness. And you can’t be dogmatic when it comes to these things, because each person and each culture has their own values. There are no absolutes and each person defines their own limits. Taking these differences into consideration, the heart can play a useful role. In addition, heart can tell us many things when it comes to staying true to decisions in times of doubt; in this sense, it is interesting to experience the strength of values and principles in finding personal peace.

3. When your team or employees are suffering injustice. This is normally one of the more difficult areas, because who would dare to put their hand in the fire to defend another person? At that point, even when the head has to be capable of measuring the consequences, I think the heart has to start to beat strongly. Don’t be fooled: by the extent that you don’t want to or don’t know how to defend those around you, know that sooner or later they will come for you. This was something said by Martin Niemöller (not Bertolt Brecht), the German protestant Pastor who in 1945, after talking about the passiveness of the world as the Nazi exterminated the communists, the social democrats, the union leaders and the Jews: “When they came for me, there was nobody left to protest”.

4. When you know that you have lost everything. Here, together with a great adrenaline rush, the heart plays a part in giving us epic stories. We could find some good examples from the business world, but on this occasion I prefer to use football.  I will always remember the 1999 Champions League Final, when Manchester United scoring two last-minute goals in injury time to win 2–1, after having trailed for most of the match. This victory came because the players felt their hearts rate rise to 180bpm, clenched their teeth, knew how to play through the pain, and gave it all or nothing. It was no place for the timid.

5. When a person’s professional or personal life is about to change definitively.  Vargas Llosa, in his book Conversations in the Cathedral, recounts a conversation between two friends who are reflecting on the moment in which their country, Peru, went to the dogs: “When was Peru screwed?” one of them asked the other.

That phrase, knowing the exact time something happened, reflects exactly what I am talking about. In our professional careers, we have all experienced moments that, looking back, have been moments that changed our lives: if I hadn’t kept my mouth shut, if I had done something or if I had known. I have my moments and you, dear reader, I am sure you have yours. What’s more, I am even fairly certain of the exact date when the five or six key moments in my professional life happened. And in nearly all of them, believe me, I allowed my gut feeling to have its say.

So that’s the thing. Cool head or warm heart. And it must be important, because at last Spielberg and Kubrick’s Artificial Intelligence (AI) has hit the cinemas. And even on the silver screen a robot boy wants to follow his heart, and if a robot wants a heart, why do we humans keep trying to hide ours?

Summary of a post published in the daily paper “Diario 5 Días” October 5th, 2001